JUNIOR NETBALL LEAGUE – ALFORD A V ALFORD B
The last league match of the term took place on Monday when our two Junior Teams met in Aberdeenshire Junior Netball League.

All players took time to settle into the game, rushing their passes and not keeping possession.
Despite some good work in defence, Alford A built up a 7 goal lead by the end of the first quarter.

The play in second quarter was more even with Grace and Emma working well in the circle to win the quarter for their team.

In the second half, Alford A began to increase their lead and won the game 20-2. Good play from all the girls.

Thanks to our senior girls, Molly and Leoni for umpiring the game. 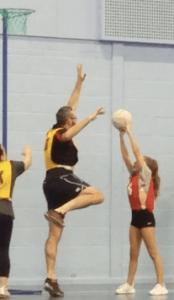 S3-6 PLAYERS V ‘INVITATION’ TEAM
The last session of the term saw the Alford players play against an ‘Invitation’ Team which included coaches, parents and our Active Schools Coordinator, Pete Young. This was Petes’ first experience of playing in a match and he started at Wing Defence before moving to Goal Defence.

The match was very even, played with great spirit. Good teamwork from all the players. The final result was a victory for the ‘Invitation’ Team 13-10.