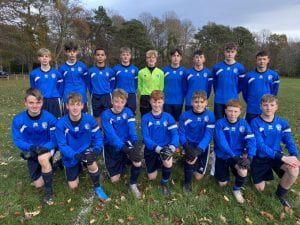 The U15 Footballers travelled to Banchory on Thursday 25th in the Preliminary Round of the Scottish Shield. The game started very evenly with both teams struggling in the heavy underfoot conditions but after 12 minutes, Alford took the lead. A corner from the right was delivered perfectly to the edge of the six yard box for Fraser to knock into the bottom corner. The remainder of the first half saw a couple of chances for both teams. Lucas headered a goalbound effort off the line and Harrison had two attempts saved by the Banchory ‘keeper.

The second half court not have started any better. Two minutes in and Harrison doubled our lead. Great build up play down the right saw the ball find his feet at the edge of the box and he calmly finished beyond the goalkeeper. Alford then grew in confidence and started to control the game. More chances followed before a ball over the top saw Harrison and the last Banchory defender in a footrace. Despite the best efforts of the defender, Harrison knocked it round the goalkeeper for an easy tap in. A slight lapse in concentration saw Banchory get a goal back and Cameron then sharply saved to knock one by the post. At the other end Harrison hit the post in search of the hat-trick but a better opportunity would come. A cynical foul as he was about to shoot, after a quick thinking freekick from Liam, saw the referee have no doubt in awarding the penalty. Harrison stepped up and rolled it into the bottom corner to put the game beyond doubt.

A thank you has to be given to Mrs Wotherspoon who took time out of her busy schedule to support the boys on the trip over. The Man of the Match award could very easy have gone to many of the boys, especially Harrison with his hat-trick, but Blair was tremendous at the back throughout the full game so he receives that award. The next round will see us head to Inverurie with the date to be confirmed.