In November 2021, four of our senior pupils from Alford Academy took part in the British Physics Olympiad. The Olympiad is a a competition open to all schools, in which pupils across the UK produce written answers to several challenging questions in theoretical physics. Their answers are sent to Oxford University for marking and results are released later, once all papers in the country have been reviewed by markers.

Our pupils worked hard to prepare for this extracurricular activity and developed their problem solving skills and their confidence to deal with new tasks. This year, 2,300 pupils from 393 schools across the UK took part in the competition.

Our pupils were awarded two bronze II awards and two commendations for their performance in the written exam.

We would like to thank the Rotary Club in Alford for sponsoring us to take part in this competition and to everyone in the academy for their time and effort in helping us. 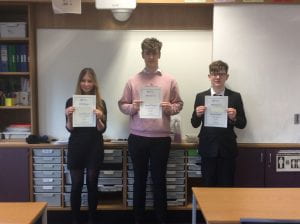 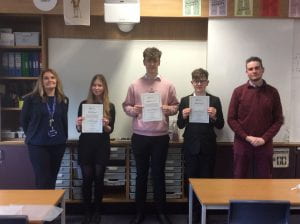