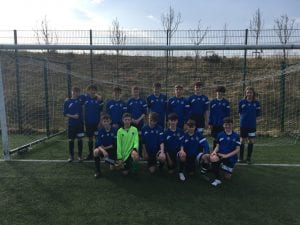 The U14 boys team played their first home match of the season against Turriff on Wednesday afternoon.  The team had been narrowly beaten up in Turriff back in November so were keen to make amends for that loss.

Alford started the game perfectly, scoring after just 90 seconds.  Darroch picked up the ball at the edge of the Turriff box and arrowed a shot across goal that nestled into the top corner.  However, Turriff got a goal back just a minute later and got a quick second to lead the match 2-1 after just 5 minutes.

Alford played their way back into the game, creating numerous chances but it took until around the 20th minute to get the equaliser.  Darroch picked up his second of the game, with a fantastic free-kick from the right-hand side of the box, into the top corner.  Thom, Samuel and Findlay had been working hard up top and putting a lot of pressure on the Turriff backline.  Finn, Joseph and Mungo were picking up loose balls in midfield and driving the team forward at every opportunity.  Thom & Samuel both created a number of chances for themselves and were duly rewarded with a goal each before half-time.  Half time: Alford 4 – 2 Turriff

The message at half-time was simple: keep up the hard work, get the next goal and enjoy the second half.  Findlay duly delivered with a swerving shot past the Turriff ‘keeper to make it 5-2.  Aidan made it 6-2 just a few minutes later after a driving run down the right wing, he cut inside and blasted it high into the Turriff net.  The Alford onslaught continued with Joseph scoring a peach of a lob from 25 yards.

Turriff had a couple of attacks in between, with a goalbound shot flashed across but Ewan made a great save to push it out to safety.  The Alford defence of Gregor M, Gregor C, Logan and Harris grew in confidence as the match went on and were calm and composed on the ball, especially in the second half.

Darroch completed his hat-trick with 15 minutes to play with a close-range finish after some excellent work from Aidan down the left-wing.  Ryder got himself on the scoresheet next, with a composed finish from 6 yards into the bottom corner after a nice turn.  James, Finn and Mungo were controlling the midfield and setting up attack after attack in the second half.

It was very impressive to see the boys displaying such great teamwork throughout the match.  They supported and worked hard for each other and got the performance and result that they deserved.  We have a big league and cup double header next week at home to Inverurie and the boys will be full of confidence ahead of that match.  Well done boys!